When I look back on my childhood I have good memories and positive thoughts about it, but it definitely wasn’t always easy. Although there were some painful times in life I discovered that not fitting in actually had some advantages and even helped me be a better visual notetaker. Here’s how:

I was shy when I was a kid and making friends was hard, especially at church. I went to a different school than all the other kids in my youth group so it was hard to break into their already established bonds. I often went on youth group seasonal outings hoping to make some friends through shared experiences– trips to water and amusement parks, summer camping trips, and winter lodge retreats. Unfortunately, I was ditched by the other kids every single time, year after year.
One year at a winter retreat I was hanging around the lodge during free time where groups of kids were talking and playing games. I, of course, was by myself figuring out how I was going to spend my day because I just couldn’t bring myself to talk to anyone and get rejected again. Suddenly, I noticed a chalkboard in the corner. I knew I could pass the time with drawing and started drawing a winter scene with snowboarders doing tricks. As my pictures began to take shape, kids started noticing and came over to look. To my surprise, THEY wanted to talk to ME! I started to connect with others and by the end of the retreat, I was known by everyone as “the girl who drew the cool pictures in the lodge.” I went from being an invisible nobody to someone everyone recognized. It’s interesting how the very thing I was using to escape my social anxiety became the thing that helped me connect with others. 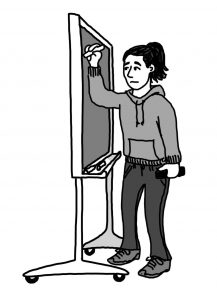 Now as an adult and professional visual notetaker I interact with large crowds of strangers on a regular basis. I’m still naturally shy and introverted but the visual notes I make creates common ground between myself and the audience. I don’t feel a lot of social anxiety because I can share about my work first, which is what most people are interested in anyway. That takes a lot of pressure off of me! If people are interested in learning more about me personally, we’ve already talked about my work so talking about myself feels more natural and comfortable.

I couldn’t figure out how to fit in during middle school so I started watching other kids to try to figure out how everyone else did it. I watched their body language, how they reacted to jokes, how they moved, how close or far they got to others… now that I say it I sound kind of creepy, but I was only trying to learn. It felt like everything I did and said was awkward and wrong so I thought if I could observe enough I could eventually copy everyone and fit in. Unfortunately, I didn’t know until much later in life that others accept you when you’re comfortable in your own skin and act like yourself. Even so, I got good at observing. REALLY good. I learned to notice subtle movements. I picked up on body language. I saw those quick glances and facial expressions flashed for a moment.
I never did quite fit in, but I did built a solid foundation of observational skills during those awkward middle school years. I was also a lifeguard in high school, where your entire job is to watch people and make sure they don’t drown. My habit of observing people in middle school actually helped me be a better lifeguard because I noticed behaviors and changes quickly. “Hmm, that kid was swimming fine an hour ago but now he’s struggling. Better keep an eye on him.”
Now as an adult and professional visual notetaker, my observational skills help me in two main ways. First, I can look at an object and draw it fairly well from memory afterwards. I may get the details wrong but it’s always recognizable. (This is a huge foundational key for visual notes: your drawings don’t have to be realistic, just recognizable). Second, I can read a speaker’s body language. By watching their body language I can tell what might be important to write down, which helps me capture the right kind of information in my visual notes. 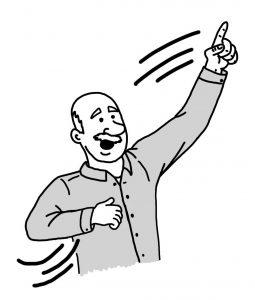 Listening: If you have nothing to say, listen.

If you’ve never been unpopular in your life, it’s like being invisible. You’re so uncool that kids don’t notice you or even if they do, they ignore you completely. They’ll talk like you’re not even there, and you’re so uncool that they don’t care if you overhear their conversations because who are you going to tell? Even parents, teachers, and school staff talk openly around kids because they think they aren’t listening… but they couldn’t be more wrong. Anyone who has heard a young child say a curse word out of nowhere knows this!
I overheard a lot of conversations during my school years. While I didn’t use the “juicy” information I overheard to ruin other people, I did learn to listen because anything I overheard gave me something to talk about with others when I didn’t feel like I had anything to personally contribute. I watched the news and listened to the radio in the car with my parents, and I liked sharing what I overheard when it was relevant. I liked overhearing adult conversations to learn what they believed. 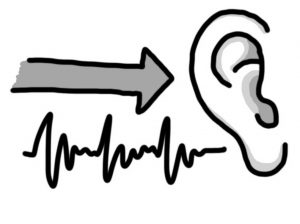 These listening skills built during my awkward years have helped me become a skilled professional visual notetaker. The most important aspect of your visual notes is the content, not how good it looks. In order to get that good content, you need to be able to actively listen with complete focus.
Maybe you were popular in school and now you’re winning people over in sales, or  Maybe you were on the debate team and now you’re a lawyer. Me? I was the shy, nerdy art kid, but now I get to visualize information. My behaviors and motivations as a young kid weren’t exactly healthy or mature, but there was some good that came from it all which helped build the foundations of skills I use regularly to create visual notes for clients. I’d encourage you to look back on your own childhood and see how your actions and behaviors built skills you might be using today!

If you’ve enjoyed reading, consider subscribing to my newsletter in the sidebar and get articles just like this delivered right to your inbox.